This morning I woke up at 6:20 and was on the road by 7:30. My pre-run meal was a banana, apple, and a chocolate peanut butter chia bar. The goal was 7 miles, and I had a vague “plan” of where to go. By that I mean I was going to leave the hotel, go right, then go left up a hill and eventually find myself running around a nearby golf course. Well instead of the intended left turn I made an on-the-spot decision to continue. Instead, I make the next left turn because I knew it was a main road.

Oh man. The first 2+ miles were all uphill and pretty much brutal. The combination of hill and heat is not something I’m used to anymore being in DC so this was work. Finally somewhere between 2.5 – 3 miles I got into the grove and was feeling better as I came upon a roundabout. Instead of continuing straight to what looked like another big hill, I headed right for some slight uphill. I would say this was a good choice because the road then evened out a bit until I had to turn back at the halfway point. At about 5 miles I stopped to intake my first gel ever: a Chocolate Clif shot. I didn’t gulp it down and felt like it was totally bearable in consistency and flavor, but then again I have a thing for chocolate. I followed it down with a little bit of water I had stashed in the shade on my way up the hill.

The rest of the run went smoothly and it was enjoyable to be going downhill finally. Except, at 5.5 miles during the usual “jump to run in the weeds on the side of the road due to incoming traffic that won’t move,” I kicked myself in the left leg trying to maneuver over a knee-high weed. So the run left me with an instantly raised bruise but still a desire to keep on going after I hit my intended distance. 7.2 miles in the bank.

Below are photos of the run (don’t worry there is no photo of the dead goat and bird I ran within inches of 5 minutes in). Some new running clothes I wore, the beginning of the hill I’d thought would never end, more hill, a nice moment of no traffic, the roundabout, a typical moment of traffic, and delicious post-run breakfast of fruit, an egg white omelet, and a slice of whole wheat toast. By the way, my new LuluLemon shorts that I was hesitant to invest in were soo worth it – no chaffing or annoyances otherwise! 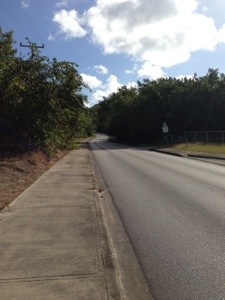 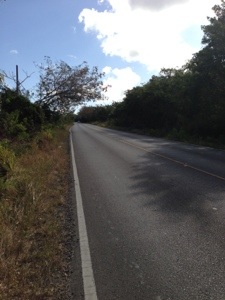 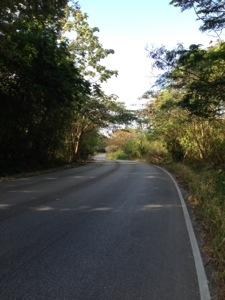 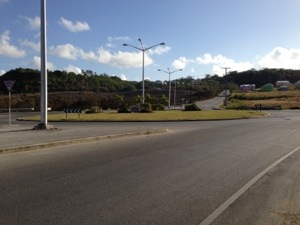 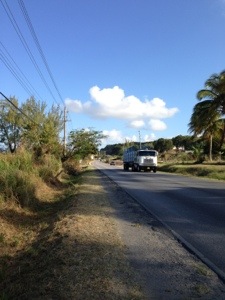 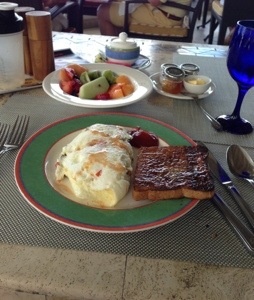